Welcome to our new website! Attention all members - you will need to reset your password to login.  Please check your spam/junk folder for the email with the password reset link.

The International Suzuki Association, in conjunction with Alfred Music, is pleased to announce the highly anticipated recordings of the Suzuki Violin School, Volumes 4-6 by internationally renowned violinist, Augustin Hadelich in collaboration with pianist Kuang-Hao Huang.

The ISA Violin Committee is indebted to violinist Augustin Hadelich and pianist Kuang-Hao Huang for their exacting standards during the exhausting recording sessions for Volumes 4–6. These performers brought tremendous energy, artistry, and dedication to bear in all aspects of their collaboration for these recordings. Augustin expressed many times his appreciation for the honor of being selected as the recording artist and for the opportunity to make a lasting contribution to the world-wide Suzuki community. These are recordings that students, parents, and teachers will enjoy listening to for years to come.

Mr. Hadelich said, “It was a great honor to record Suzuki Violin Books, 4–6, a recording that will be heard by so many young students as well as their parents and teachers. I fell in love with the sound of the violin at a young age, and I hope to communicate my enjoyment and love of playing the violin to these young listeners. I hope that they will feel motivated and excited to play as they listen to this music every day.”

The new recordings will replace all existing ones associated with the Suzuki Violin School International Editions, available as: Violin Part Book, Piano Accompaniment Book, Violin Part Book & CD Kit, and CD only. Listening tracks that include violin and piano appear first on the CD followed by piano accompaniment-only tracks for play-along purposes. Recordings will be immediately available via digital download on Amazon, iTunes, and media.alfred.com and will be available for teaching and practice purposes on SmartMusic at a later date. The Violin Part Book & CD Kits and CDs will be available in Summer 2022. 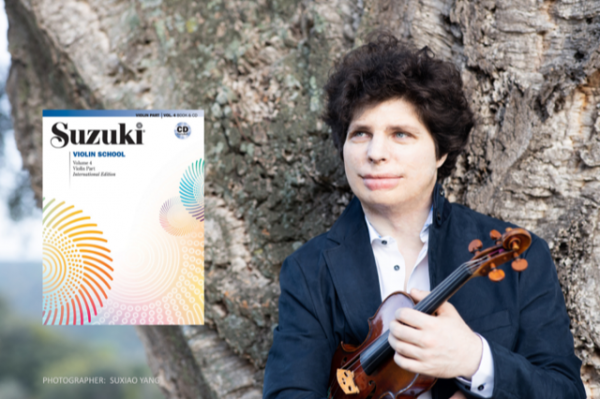 Augustin Hadelich is one of the great violinists of our time. From Bach to Brahms, from Bartók to Adès, he has mastered a wide-ranging and adventurous repertoire. Often referred to by colleagues as a musician's musician, he is consistently cited worldwide for his phenomenal technique, soulful approach, and insightful interpretations.

“The essence of Hadelich’s playing,” The Washington Post has opined, “is beauty: reveling in the myriad ways of making a phrase come alive on the violin, delivering the musical message with no technical impediments whatsoever, and thereby revealing something from a plane beyond ours.”

Born in Italy, the son of German parents, Augustin Hadelich is now an American citizen. He holds an Artist Diploma from The Juilliard School, where he was a student of Joel Smirnoff. After winning the Gold Medal at the 2006 International Violin Competition of Indianapolis, concerto and recital appearances on many of the world’s top stages quickly followed.

A Warner Classics Artist since 2018, Hadelich’s discography includes solo, chamber, and concerto recordings. His recording with the Seattle Symphony of Henri Dutilleux’s violin concerto “L’arbre des songes” won a 2016 Grammy Award in the Best Classical Instrumental Solo Category. He was also nominated in 2018, 2021 and 2022, including for his recording of the Sonatas and Partitas by J. S. Bach (Warner Classics).

Augustin Hadelich has been honored with such awards as the Avery Fisher Career Grant (2009), Borletti-Buitoni Trust Fellowship in the UK (2011), and the inaugural Warner Music Prize (2015). His accomplishments were further recognized in 2018 when Musical America named him its Instrumentalist of the Year. In 2021, joined the violin faculty of the Yale School of Music.

ABOUT THE INTERNATIONAL SUZUKI ASSOCIATION

Alfred Music, the leader in music education for over 100 years, produces educational, reference, pop, and performance materials for teachers, students, professionals, and hobbyists spanning every musical instrument, style, and difficulty level. Alfred Music is located in Los Angeles, with offices around the world, including Germany, Singapore, and the United Kingdom.

Since 1922, Alfred Music has been dedicated to helping people learn, teach, and play music. Alfred Music currently has over 150,000 active titles and represents a wide range of well-known publications—from methods like Alfred’s Basic Guitar, Alfred’s Basic Piano Library, Premier Piano Course, Sound Innovations, and Suzuki, to artists like Bruce Springsteen, Led Zeppelin, The Rolling Stones, and The Who, to brands like Harry Potter, Lord of the Rings, Star Wars, The Wizard of Oz, Rolling Stone magazine, and Billboard.

Alfred Music is now also paired with MakeMusic, which is part of Peaksware Holdings, LLC portfolio of companies, to transform how music is composed, published, taught, learned, and performed by bringing together the leaders in educational music publishing and music technology.